(Open to all BMC Pass Holders)

Calling all electronic producers and composers looking to get expert advice on how to doctor your tracks for the sync industry.

Ever wanted to hear your music on an advert or TV show, or even in a film, and then reap the financial rewards?

Want to know what’s holding your tracks back from being picked up by supervisors or music libraries? 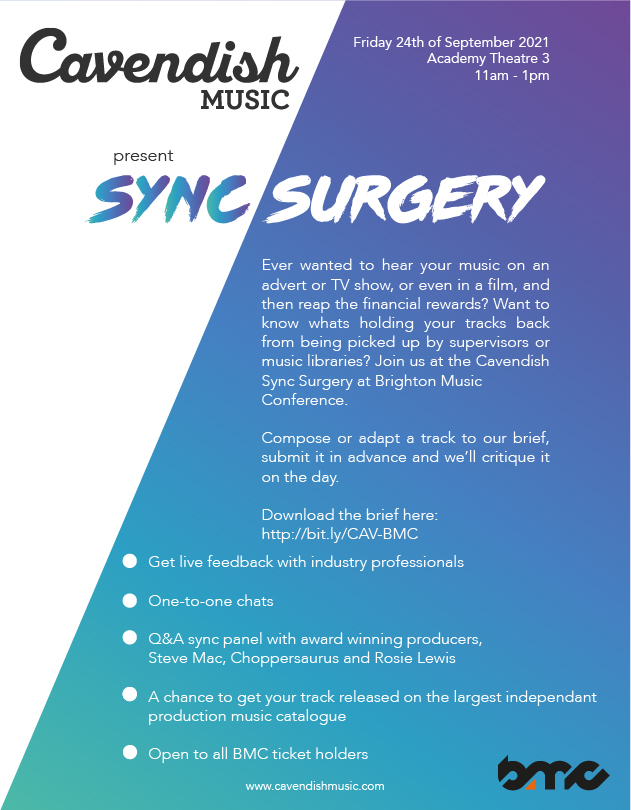 The Cavendish Music Production Team are heading to Brighton Music Conference this year to run a ‘Sync Surgery’ for up & coming electronic producers wanting to learn more about the world of sync.

We’re offering producers a chance to have their tracks remedied for sync by our head of production and senior producers. We’ll be offering live feedback on your tracks and one-to-one emergency consultations, followed by a panel with award winning electronic producers, all to give you our advice and expertise with the perspective of a production music library.

We’ve created a real-life brief for producers to compose a track for us, submit in advance and then we’ll critique it live on the day.

We’ll also allow you the chance to amend the tracks later, selecting the best ones to sign to our library!

For the second half of the surgery we’re hosting a Sync Panel with producers who are the top of their game, and we’re excited to announce Brighton legendary producer Steve Mac will be joining us!

Steve needs little introduction, one half of Rhythm Masters and remixer of some of the biggest names, he’ll be bringing his extensive knowledge and skill of electronic music production, giving his insight in to the world of sync from production music to smash hits to scoring and supervising music for film.

Rosie Lewis, singer, songwriter and topliner will be giving us her insight in to writing and performing for sync, as well as top bespoke sync writers and winners of the Production Music Award’s Best Electronic Track in 2018 – Jake Shillingford & Nick Evans from Choppersaurus, fresh from their recent signing to Mute Records and armed with expert advice on how to create the perfect sync track.

We’ll be discussing what its like to make music for sync full time, what the secrets are to making award winning electronic music and tips and tricks for getting yourself and your music noticed by the right people. We’ll also discuss how the pandemic has affected the sync industry, especially in the production music world, and what the future may hold. Budding music makers will get the chance to ask questions from these leading industry experts.

The sync surgery is open to everyone, whether you’re a music maker, manager, creator or collaborator or just want to know what the hell sync is all about!

11.45am – 12pm – break and room cleaning. Opportunity for questions and chats in the networking rooms

1.45pm – Opportunity for questions and chats in the networking rooms

We are proud to support The Last Night a DJ Saved My Life Foundation, our official charity partner.